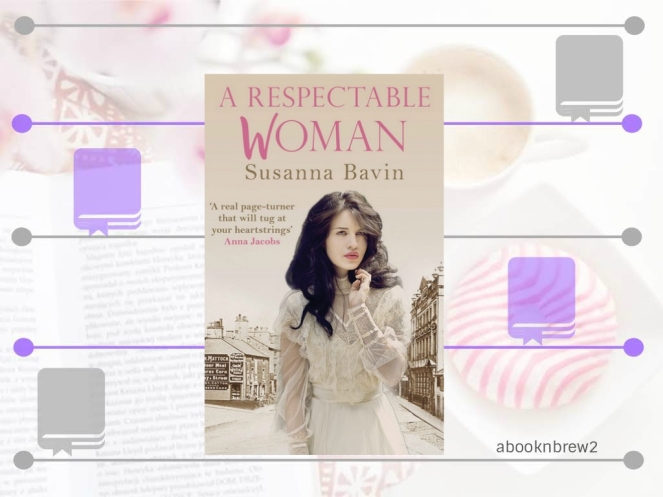 After losing her family in the Great War, Nell is grateful to marry Stan Hibbert, believing she can recapture a sense of family with him. But five years on, she is just another back-street housewife, making every penny do the work of tuppence and performing miracles with scrag-end. When she discovers that Stan is leading a double-life, she runs away to make a fresh start.

Two years later, in 1924, Nell has carved out a fulfilling new life for herself and her young children in Manchester, where her neighbours believe she is a respectable widow and a talented machinist. But the past is hard to run from, and Nell must fight to protect the life she has made for herself and her children.

I love reading these books set in Manchester.  The dialogue and the characterisation, especially of the women is so authentic.  They always take me back to memories of my grandma who was probably a young girl around the era this book was based on and lived her whole life close to Manchester.  Just like the characters in this book my grandma lived in a two up two down most of her life.

There’s a lot in this book in relation to the social problems of the day.  Women were very much viewed as second class citizens and story lines cover employment, class divide and the social stigma of being a single parent – ie it’s one thing to be a war widow, quite another to simply have left your marriage no matter how bad things were.

It has all the ingredients of a good saga.  There’s the bad apple in the story, well actually there’s two including Nell’s husband.  There’s the romantic interest between Nell and Jim (James) Franks who was a bit of a double act.  In some ways I liked him but more so as James than Jim.  For me personally, I wasn’t quite so keen on him as Jim the window cleaner, he was just too overly nice for my liking.

There are some court scenes in the story which I thought were brought to life really well, to the extent you felt you were sat there in the court with them.  It also struck me how little courts of law have changed in over a century in the way they address people.

Then there’s the nasty characters.  As well as Nell’s cheating husband there was Edmund Tanner who made everyone’s life a complete misery.  If you’re looking for a character to loathe in a book – he’s your man.

It’s an all-round emotional and compelling story with many threads and twists running through it and one which I really enjoyed.

Thank you to Susanna Bavin for a paperback copy of this book for review.

You can get this book on both Amazon in all formats and in bookshops too.

2 thoughts on “A Respectable Woman by Susanna Bavin”